Abigail Zalewski and the gameday ghosts

When the Humber girls’ basketball team triumphed two years ago in a buzzer-beater match against longtime rival Sheridan College, players and fans alike went wild. They weren’t the only ones.

“It was insane. I forgot that I had to do my job and write down all the scores because I was just so caught up in the moment,” recalls Abigail Zalewski. “I’ll remember it forever. The atmosphere in the gym was unmatched.”

Abigail – Abby, to friends and family – is what her boss at Humber Gameday Operations calls a “ghost.” Working behind the scenes, Abigail and her colleagues strive to do their jobs without anyone knowing in order to let athletes and coaches focus. From erecting bleachers to recording stats, the ghosts are a key part of varsity sporting events.

Abigail (left) and her coworkers in their gym day gear

“There’s more work that goes into game days and tournaments than you’d think. It truly does take a village,” she says.

It’s been a while since fans packed the stands shoulder-to-shoulder like at the Sheridan game, but Abigail has continued to support local supporting communities throughout the course of the pandemic. Now in her final semester of the Public Relations stream in Guelph-Humber’s Media and Communications Studies program, Abigail is balancing her work on the Emerge capstone project with her internship at Special Olympics Ontario.

Her involvement with the organization first began years ago in her hometown of Sarnia through her brother Edward, who is developmentally delayed, when she saw firsthand how Special Olympics Ontario builds confidence and a sense of community among disabled athletes. Both parents are sports buffs who encouraged their kids early on to pursue athletics.

With her passion for writing and visual media, Abigail decided to attend the University of Guelph-Humber in order to explore related career paths. In addition to her work with Gameday Operations, Abigail also played on the Humber girls’ extramural basketball team. Originally interested in pursuing journalism, her focus shifted after a guest lecturer in Prof. Heath Applebaum’s first-year Introduction to Journalism and PR class delivered a talk that was perhaps not as inspirational as intended.

“He brought in a woman who was a journalist, and after what hearing what she had to say about the job outside of writing – the hours, the freelancing, the job security – I kind of realized ‘Okay, this isn’t for me,’” she laughs. “That’s what made me choose PR, because I still get to write and create content which I love, but it’s a bit more money and security.”

While she’s enjoyed the periods of living in Toronto when classes are in, Sarnia will always be home for Abigail. “I’m a small town kind of girl,” she says. “I love being surrounded by water and nature.”

For Abigail’s younger brother, the Sarnia sporting community is the source of many fond memories with his sister. Though not a rabid hockey fan herself, Abigail frequently buys hockey cards for her brother Edward, who is an avid collector.

Talking about his favourite hockey cards, Edward mentions a valuable Tim Horton holo-card worth a hefty eBay price tag. Also memorable, though, is his collection of signed cards from the local Sarnia Legionnaires junior league hockey team. The players are perhaps not as high-profile as Canada’s beloved corporate icon, but the cards are meaningful to him partly because they represent a fond memory with his sister. 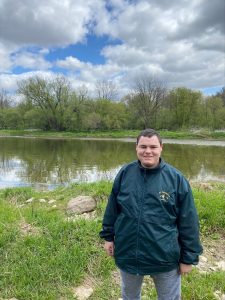 “During COVID there were no games on. Abby took me for lunch at Swiss Chalet one day, and there was a player sitting right behind us wearing a Legionnaires jacket. I knew his name was Tristan Conrad, and so Abby and I got to say hi,” he recounts. “It was a really good memory.”

Though she recognizes that the market for PR jobs in Sarnia is not the biggest, Abigail is optimistic and passionate about working within her community and using her skills to further the causes that are important to her. As with any aspiring media professional in 2022, adaptability is key.

“I don’t have one specific job in mind. I’m keeping it open: whatever opportunities come to me will come to me,” she says.

In the meantime, Abigail will be going back to work for Gameday Operations this semester – though you probably won’t spot her unless you’re looking closely.

“College sports have started up again so I’m going to be back next week. I love that job. As a person who’s grown up heavily involved in sports, it’s like the ideal job. I get paid to watch sports: what could be better than that?”