ConNext, one of many networking opportunities on campus

Just like speed dating, but for your professional development. Dozens of Humber and Guelph-Humber students had a chance Thursday to meet with industry professionals.

Filice said the inspiration behind the event was that networking can sometimes be awkward for students but putting a new spin on networking aims to combat that trend, making it easier for students to move around the room and meet every professional.

The event consisted of professionals each sitting at there own tables while small groups of students moved around the room in seven-minute intervals, ending with a mix and mingle period giving everyone a chance to go back and build in their initial connections. 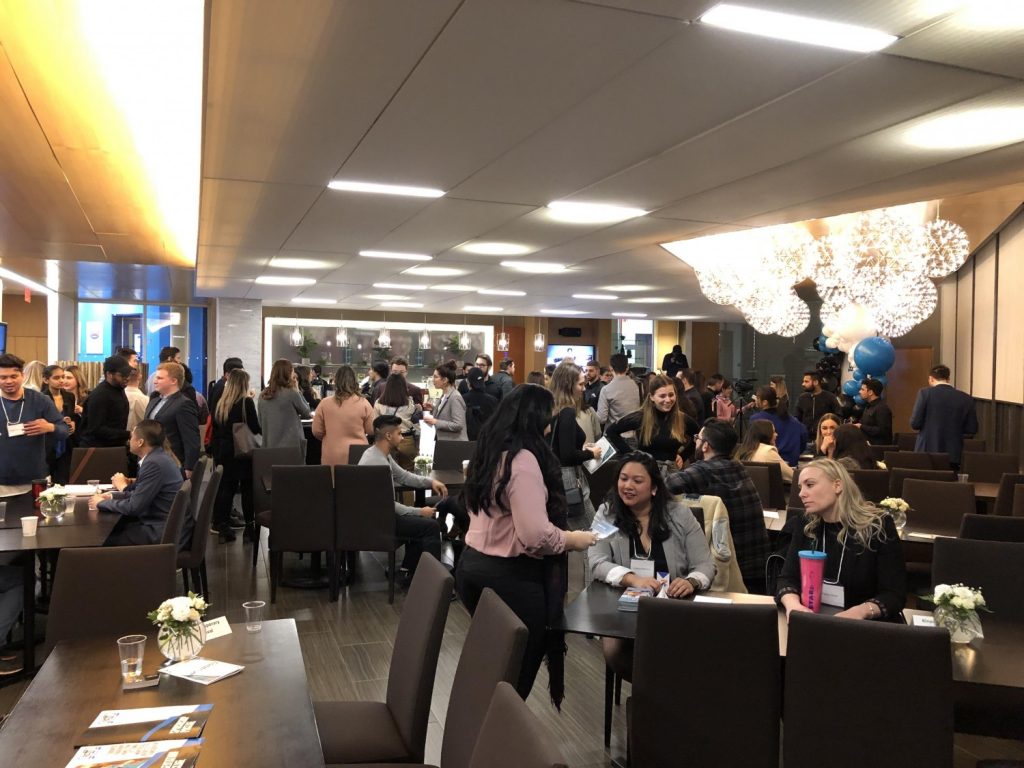 Melissa Patrizi, career services coordinator at the university said there is serious value in networking, especially during your time in school where you can take full advantage of opportunities.

Patrizi said, Networking is a chance for “professional development”, understanding what possibilities are out there and where you can see yourself.

Patrizi said students should be networking as early as their first or second year.

Partizi said, “ideally you’ve made enough contacts through your networking that when you graduate you have opportunity and people have a vested interest in seeing you succeed”

Partizi said networking has the potential to open a “hidden job market”, giving students opportunities that may never be formally posted.

Students ought to keep three things in mind while building their networks suggested Patrizi.

You should always be yourself, you should dress the part and you should value genuine relationships.

Filice said the hope is that students take the opportunity to come to networking events regardless of their area of study.

“Meeting people in the industry is so important because you just never know, having connections in your back pocket might be a lifesaver one day,” said Filice.

SmartSweets representative Michael Pelkola, who was a guest at the event, said he is always happy to attend networking events.

Pelkola said events like these are beneficial for both the professionals and students. Students are potentially perfect candidates for future employment, or at the very least help gain new perspectives from individuals coming up in the industry.

First-year media studies student at Guelph-Humber, David Rosic said after attending the event he is planning on pursuing more networking opportunities in the future.

Patrizi said networking comes in many different forms such as online, events, panels, career fairs and conducting an informational interview.

All students should be on LinkedIn, as it is a great tool for getting and staying connected with your network, said Patrizi.

The ConNext event is the first of many Emerge projects this year, making a change from previous years, where Emerge hosted a single conference. The hope is that this will give students more opportunity to take advantage of the different opportunities Emerge has to offer.

Partizi said all upcoming networking events and opportunities can be found in Career and Placement Services weekly eNews letter, sent out weekly through every student’s Guelph-Humber school email.