At the Mountain of Fire and Miracles Ministries on Rexdale Boulevard, congregants expect their weekly congregation of more than 500 to swell to 8,000 within 10 years

When I walked into the church, a sign on the wall said that those who have tattoos will be burned by hellfire. I glanced down at the tattoos on my ankles and wondered what I had gotten myself into.

It ended up being a four-hour service filled with dancing, preaching, singing and testimonials.

I was not expecting that when I entered Canada’s head branch of the Mountain of Fire and Miracles Ministries, a square stripmall-looking storefront on Rexdale Boulevard across from the now-closed Steak Queen restaurant, infamous from the late Rob Ford’s days as Toronto’s mayor. 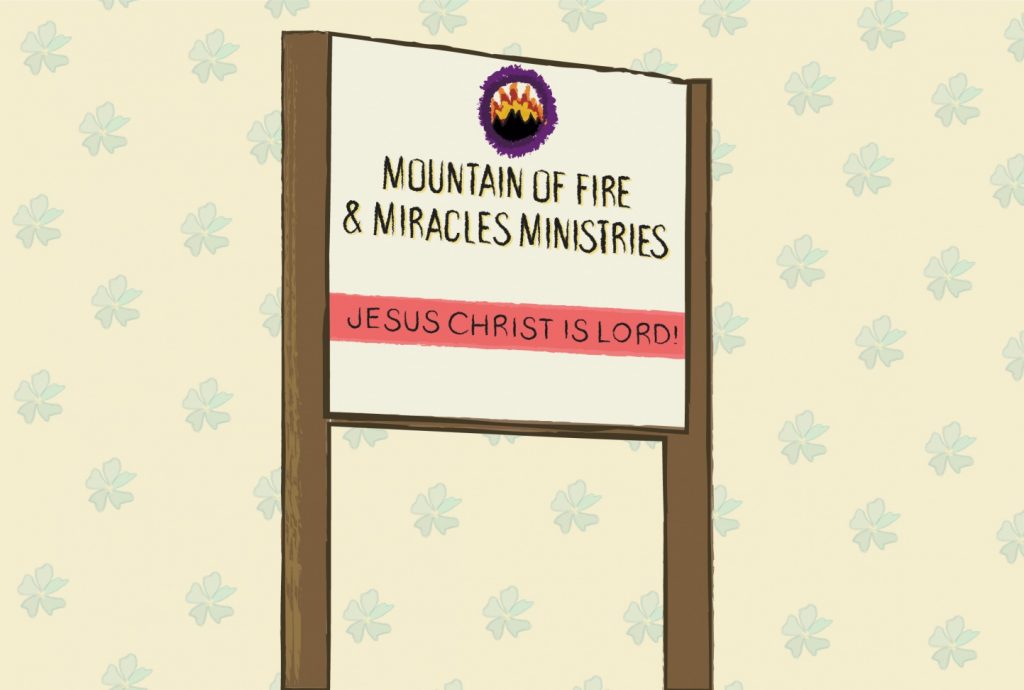 The ministry sign can be seen driving along Rexdale Blvd.

Dr. Daniel Kolawole Olukoya founded the original Mountain of Fire and Miracles in Lagos, Nigeria in 1989.

This ministry became one that believes in aggressive prayer to combat spiritual and physical struggles.

Dr. Matthew LaGrone, who studies and teaches religion, said that Pentecostalist branches of Christianity hold with the utmost belief that prayer genuinely works. He said prayer is “direct, divine contact.”

Queen’s University Ph.D. candidate, James Kwateng-Yeboah, who is getting his doctorate in cultural studies, said prayer “claims to possess answers” to social issues such as disease and poverty.

The Rexdale location has been open since 2009 and is the head branch in Canada. Adetayo said every Sunday, roughly 500-550 congregants attend the service.

The front doors of the ministry and the bookstore, which is attached to the church.

Upon entering the church, I had almost a dozen people welcome me to the service. Young families, middle-aged folks, teenagers and grandparents – all dressed in their Sunday best – filed into the church and began to wait for the service to begin.

All the women were in traditional Nigerian head coverings and dresses; covered in colour and sparkles which hugged their bodies. The men were wearing suits with colourful shirts.

Before the service began, I was taken to the front row of the church by an enthusiastic woman who began to pepper me with questions. She noticed that my knee-length button down dress was showing some skin. She was worried about that and placed her handkerchief on my lap to cover the displayed skin.

The ministry has strict rules regarding how to dress appropriately. The rules also outline restrictions regarding jewelry, body piercings, tattoos and hair extensions. From the posted rules in the church, it is believed certain expression through bodily means can defile an individual.

The service itself was filled with exuberance. Hymns were yelled and sung to the ceiling by everyone in the church. Movements were purposeful and graceful, with a hallelujah shouted after every statement. At one point my neighbour gave me a napkin and told me to get ready to sweat. She stood and started shaking her fist to the sky. As someone who doesn’t dance and has a terrible singing voice, I was thrust out of my comfort zone within minutes.

Halfway through the service, the pastor announced that testimonials would be taking place. Roughly 15 people walked up to the front of the room and spoke about all aspects of their lives that caused them to believe in the power of religion.

A man told the church his daughter was close to dying at SickKids hospital with an unknown disease. He credited prayer, combined with his determination to find an answer through blood-tests, to help discover solutions for his daughter’s illness.

Once the first group of people had spoken their testimonials, the pastor encouraged more to come up and talk to the church. Within a breath, close to 30 additional people rose out of their seats and opened up to the congregation about their struggles and how they overcame these obstacles.

Near the end of the service people started walking around handing out envelopes. I didn’t realize that these envelopes were supposed to hold the expected tithe. I felt out of place paying the tithe as I was not a congregant at the church.

Everyone around me just held the envelopes while paying attention to the minister preaching. I quietly slipped mine in my wallet and decided to forget about it.

Roughly 10 minutes later the minister moved on from preaching about liars and thieves to paying the tithe. He said to the room, “even if you do not want to pay or you cannot pay, just know that the Lord wants you to pay.” That statement sent shivers up my spine and I froze, while everyone around me sprung into action and began filling envelopes with money.

James Kwateng-Yeboah is a PhD student that attends Queens University. He is studying cultural studies. When I asked him about the tithe he discussed the complexity of issue and considers who has the authority to dictate the practice as right or wrong.

Adetayo said that the tithe is used for a variety of reasons at the ministry, but is focused on supporting and expanding the congregations throughout North America.

According to the 2016 Canadian census, 20,630 out of 42,430 Nigerian-Canadians live in Ontario. This number has been rising over the last 20 years. The Mountain of Fire and Miracles Ministries hopes to cater to the rising population with future developments to the current location and expanding the ministries throughout the country.

Growth is on the horizon. The Rexdale congregation itself is looking to expand to over 800 attendants in the next five years. As well, there are plans to move out of the industrial building and build a new structure for the ministry. Adetayo said they are looking to expand the ministry to the Caribbean, St. Catherines, Ont. and Nova Scotia. He said he expects close to 8,000 people will become a part of the Mountain of Fire and Miracles Ministries in Rexdale over the next 10 years.

The Mountain of Fire and Miracles, while perhaps not a typical Sunday stop, has become an integral part of the Rexdale landscape and will continue to be so in the years to come.

There are 13 Mountain of Fire and Miracles Ministries in Canada. They are continuing to look to expand to new locations throughout the country.

Curry in a Hurry: The best roti near The University of Guelph-Humber

Haven’t been on campus since the pandemic? Here’s what it’s like inside the Guelph-Humber bubble

Light rail chaos: How Metrolinx is learning from Ottawa

Taking research papers beyond the classroom

Where to get your coffee near campus during the pandemic

Maclean’s rankings released for Guelph but what about GH?